“And because I love this life, I know I shall love death as well”     – Rabindranath Tagore

“Darkness travels towards light, but blindness towards depth”     – Rabindranath Tagore

“Man has in him the silence of the sea, the noise of the earth, and the music of the air”   – Rabindranath Tagore

“Like a cut diamond that needs the light of the sky to show itself, the human soul on its own cannot express its essence, and remains dark. Only when it reflects the light from something greater than itself, does it comes into its own”     – Rabindranath Tagore.

“Often the poor have more nobility in them than the actual nobility.”

The Konark Sun Temple, originally built on sea shore is also called as the Black Pagoda due to its dark color. Though the temple is dedicated to the Sun god, the legend also has it that after slaying demon Gyasur, Lord Vishnu left his belongings at several places to commemorate his victory – conch in Puri, disc in Bhubaneswar, mace in Jaipur and lotus in Konark. The most important part of this temple apart from the legends and myths around it, is its exquisite architecture! The temple was built in the form of the celestial chariot of the Sun God being pulled by seven galloping horses on 12 pairs of wheels towards east; and hence the main entrance of this temple is on the eastern side. 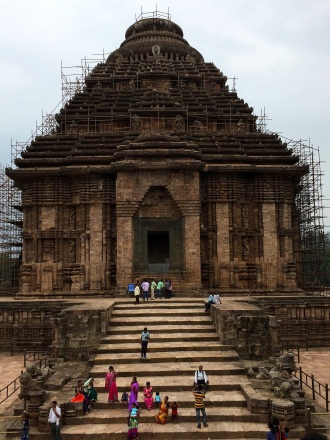 The seven horses pulling the temple eastwards towards dawn is symbolic of the seven days of the week; the dozen pair of wheels represent the 12 months of the year and the eight spokes in each wheel symbolize the eight ideal stages in a woman’s day.  The entrance of the temple is guarded by two huge lions, each killing a war elephant (represents pride) and beneath the elephant (represent wealth) is a man. This symbolizes the conquest of spiritual power over worldly power and the symbol of ignorance conquered by knowledge. The temple consists of a vimana (main temple) for housing the deity, Jagamohana, which is a praying hall and the natya mandir wherein which the dances are performed.

The most unique feature of this temple is its design which ensures the rays of the Sun fall on the image of the Sun God at equinoxes. Also this temple is known as pancha-ratha-dekha deul with each of its façade broken by five small projections, which as a consequence produces the effect of light and shade on the surface and creates an impression of one continuous vertical line called rekha. A guide here told us that there used to be a magnet at the top of the temple and every two stones of the temple are sandwiched by iron plates, and as a result the idol was said to have been floating in the air – no idea how far this is true!

During the medieval times, this temple was used as a navigational landmark by ancient sailors to Odisha and it is said that the magnet placed on top of the temple have disturbed the compasses of these sailors leading to shipwrecks and hence it was removed on a later stage. There are two raised platforms on the right side and behind the temple which are also in ruins. The walls of the temples are adorned with rampaging elephants, military processions, hunting scenes, as well as a few erotic figurines here and there. We spent about 2.5 hrs sitting here and there in the complex listening to various stories and legends shared by the gatekeepers, some old men who are frequent visitors to this temple and of course an old guide too 🙂 Yes, Eshwar hired one!

It was this guide who told the fascinating story of a 12 year old boy called Dharmapad who had sacrificed himself for the sake of the 12000 craftsmen who worked for 12 years to complete this temple. The legend is that Bisu Maharana, heading the group of craftsmen was unable to finish off the construction even after 12 years and the king Narasimha announces that all would be beheaded if the construction wouldn’t be completed the following day. Dharmapad, son of Bisu Maharana who studied Odiya temple architecture finds out the fault lay and erects the final stone or the Kalash on top of the Konark temple. But, Dharmapad had to end his life by jumping off into the sea as he knew that the king won’t accept the defeat of his craftsmen at the hands of a 12 year old boy and definitely beheads them.

While sharing this heroic story with us, I could see the old man taking pride in Dharmapad and remembering him so fondly and as a source of inspiration! As truly remarked by the great poet Rabindranath Tagore, “Here in Konark, the language of stone surpasses the language of man” 🙂

“The more you sweat in peace, the less you bleed in war”

“Take up one idea. Make that one idea your life – think of it, dream of it, live on the idea. Let the brain, muscles, nerves, every part of your body, be full of that idea, and just leave every other idea alone. This is the way to success, this is the way great spiritual giants are produced”   – Swami Vivekananda.

“In the mountain, stillness surges up to explore its own height; in the lake, movement stands still to contemplate its own death”    -Rabindranath Tagore

“Life is given to us, we earn it by giving it”   – Rabindranath Tagore