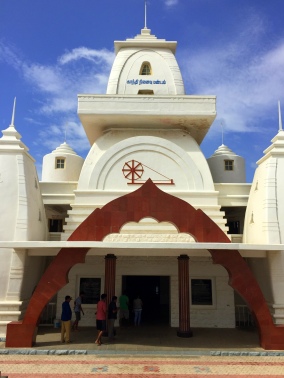 After having a darshan of the Goddess, we were onto the streets of Kanyakumari which are packed with various shops selling a wide range of goods like clothes, antiques, toys for the children and souvenirs. We went to a shop where my friend bought a jewelry box for her cousin while I bought  a small sindhoor box for my mom. After going around few more shops, we headed towards another important tourist place of this town – ‘Gandhi Memorial‘, which is located near to the Kanyaka Amman temple.

From the outer view and architecture of this Memorial, one can find it different as this is not of the Dravidian style which is quite common in South India. Instead this was constructed in the Kalinga style or the style which is most common in Odisha. It is said that the urn containing the ashes of Mahatma Gandhi was kept at this place before immersing them in the waters here. This is a two-storied building with the roof-top offering some of the best views of the town. The ground floor has a meditation hall with it’s walls adorned by various photographs of Mahatma Gandhi and the height of the central dome is 79 feet which indicates the age of Mahatma when he died! Though they said that there is a library here, which will remain open on Saturdays, we couldn’t find any that Saturday! 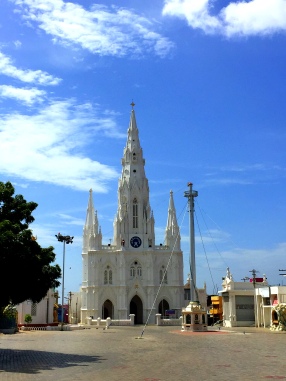 Our next place to visit is the church which we saw from the Vivekananda Rock Memorial. It seemed huge from there, so we made a point to visit this church also. We took an auto-rickshaw asking him to leave us at one of the most beautiful churches I would say called the ‘Our Lady of Ransom Church‘. It is 15 minutes away from the Amman Temple and when we reached there, the church was indeed huge. It is a pristine and exquisite example of Gothic Architecture and the church is dedicated to Mother Mary. The church stands on the sea shore and this huge white structure with the blue sea in it’s background is picture perfect! 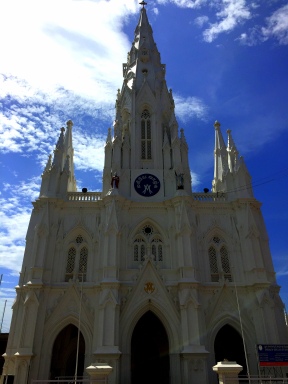 The height of this church is 153 ft with a cross on top of it which is made of pure gold. And a mast is erected infront of the temple, which was donated by a merchant who bought a foreign ship that got stuck on the seashore of Leepuram at Kanyakumari. This is an added attraction to the church! Having enough of photographs of this beautiful monument, we left the place to visit yet another significant structure called the ‘Mathur Aqueduct‘ or the ‘Mathur Hanging Trough’. 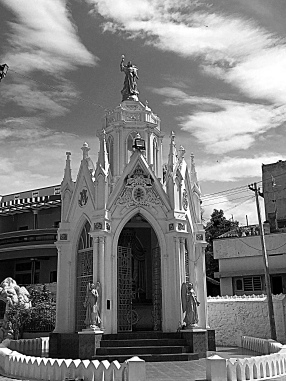