Off to Mathur Hanging Bridge – We reached Kanyakumari Bus Station and inquired about the route which we need to take to reach Mathur village. Some of them suggested us to go to Nagercoil as we could get more number of buses from there and we followed the same. After reaching Nagercoil, they suggested us to catch a bus to Thuckalay and catch another bus to Mathur Village from there. Thuckalay is about 25 kms from Nagercoil and it took us around 30 minutes to reach this place. We sought the help of few people to guide us to reach Mathur bridge but could see people being confused either because of the language or the place about which we are asking. No idea what’s going in their minds!

After a long wait of about 45 minutes, we started feeling frustrated as we were not able to get even a single bus which could drop us off at our destination. In the mean while, my friend got busy surfing the internet when I was about to tell her that we would go back to Trivandrum as it’s getting late. It was at this point of time that she showed me her mobile pointing out the Padmanabhapuram Palace, which is like just 5 minutes from the bus station. That’s how we ended up at this place instead of the Mathur Aqueduct! 😀 😀

What will be one’s expectation will be like when heard of a palace? The Mysore Palace, The Falalknuma?? Here is a different one from the routine. The Padmanabhapuram Palace located in Padmanabhapuram Fort against the backdrop of the Veli Hills that form a part of the Western Ghats in Kanyakumari district of Tamil Nadu. A magnificent wooden palace of the 16th century, this is a fine specimen of Kerala’s indigenous style of architecture. Though this palace is located in Tamil Nadu, the palace and its surroundings are owned and governed by the Kerala state.

The palace was built by Iravi Varma Kulasekhara Perumal, the ruler of Travancore in 1601 AD and was also called Kalkulam Palace. At a later point of time, the King Marthandavarma rebuilt this palace to its current state. Spread across some 6.5 acres of area, the palace enthrall its visitors with intricate wooden work. Lavish use of wood can be seen in this palace; thanks to the rich forest cover of Kerala! 🙂 Also one can witness the defining aspects of Kerala structure in this palace, like the high steep sloping roofs, often covered with tiles, copper plates or thatched palm leaves supported on a roof frame made of hard wood or timber. 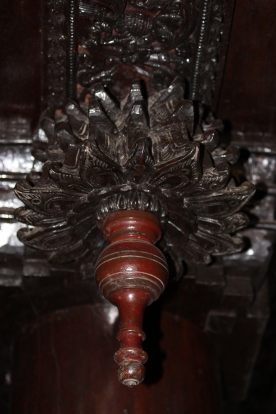 The first structure we encountered after entering the palace complex, is Poomukkham with images of horse riders on both sides of the entrance, showing exquisite wood carvings. There are few people who guide us inside the palace and explaining the history. The main attraction of this structure is the wooden ceiling which is ornamented with almost 90 lotus medallions and each one is different from the other. It was here that the erstwhile king used to entertain his special guests. Yet another attraction is a chair presented to the former king by Chinese merchants and Onavillu presented as a tribute by landlords and chieftains. 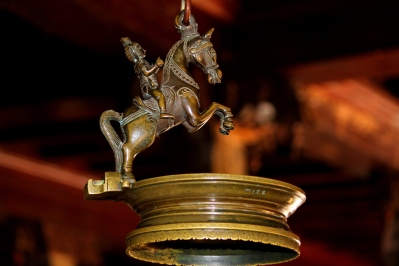 On the first floor of this structure are the Mantrasala, the King’s Council Chamber and the main attraction of this part of the palace is the bed used by the erstwhile king. It is said that the bed is made of sandalwood and is layered with a mix of 400 different kinds of medicinal herbs which are available abundantly in the state of Kerala. One can also see the Dining Hall which can accommodate 400 persons at a time!

Next structure is Thaikkottaram (Mother’s Palace), built of finely decorated and carved wooden pillars. The other structures include the Navarathri Mandapam, built by King Marthandavarma in 1744 AD which is breathtakingly beautiful and mesmerizing with it’s exquisite architecture. We came across a temple inside the palace which is dedicated to Goddess Saraswati, but it was closed at the time we visited! 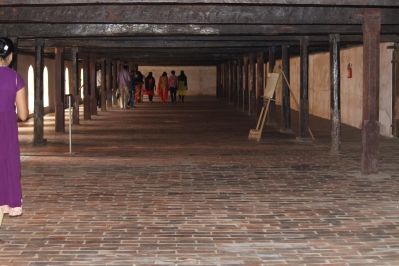 There is a long corridor in the first floor of the building bordered with small balconies on the sides called Ambari Mukhappu (bay window). It is said that the kings and queens used to view chariot races during festivals and make public appearances from this very place.  A significant feature of this structure is the lattice work on the sides of the pathway. Once out of the palace, we walked towards the southern side of the palace called Thekkekottaram. It has a heritage museum now which shows the younger generations the old palace articles, belongings of the royal family like kitchen utensils, easy chair, swing etc. 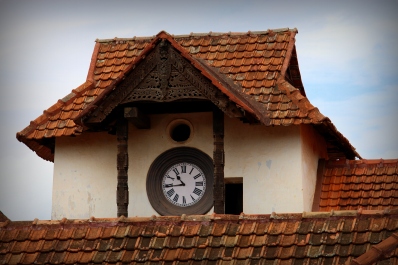 Another antique piece of this palace is the Manimalika (Clock Tower), which is believed to be some 200 years old. This tower contains a rather unique clock as its movement is regulated by two weights made up of disc-shaped blocks, that is raised every week by a 1.5 meter pendulum. This can be see from the entrance of the palace.

There is no spectacle of pomp and show about the palace and looks understated when compared to other royal palaces of India.