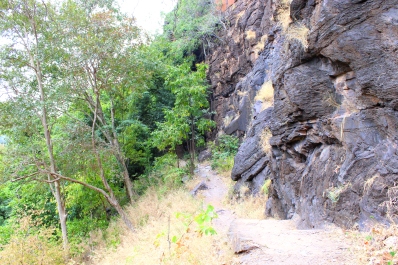 The path which we chose runs along the mountain side and the other side is the valley which is full of breath-taking views. Though the views offered by this route are awesome, the path is a dangerous one! One wrong step, we will be down by a few hundred feet! So, watch carefully for your steps. We came across a small cavern formed naturally into the mountain and small ponds formed by the river. Most of the times we were alone, as this path is less frequented. At one point of time, we were even doubtful whether we are going in the right way 🙂 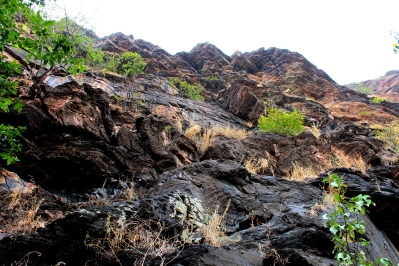 After an hour and a half trek, we were able to see some other pilgrims who are making their way up and we joined them. Half the way is just a wild path while the other half has steps. We started ascending the steps which are steep and draining the energy out of us. Half way through, Bilal was down, he told me to carry on as he can’t make it anymore. I told him to wait till I return and continued to ascend. It was here when I got to see few people trying to scale a steep hill. I heard from the devotees that there is the Ugra-Stambha up. It is a steep hill to climb and full of rocks. Though I wanted to ascend it, I don’t know how much would it take to reach the place and come back and adding to that it started to rain!

The hill which I was ascending is called the ‘Achalachaya Meru’ where the Jwaala Narasimha Swami temple is located. I need to speed up as we have to return back to Anantapur by evening, so that we can make our return journeys. So I dropped the plan of visiting the Ugra Stambha 😦 . From here, I got the first glimpse of the Jwaala Narasimha Swami temple. After ascending the steps, it was again a rugged path and the path leading to this temple goes under an overhanging rock. At the same time, a waterfall runs down from somewhere above this rock and one should walk under this waterfall to reach the temple. I saw few devotees filling up their water-bottles with this water and the feeling of walking under the waterfall with the water splashing on you after a tiring trek is truly refreshing and rejuvenating! 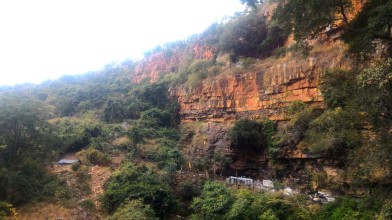 While I was nearing the temple, towards the right of the path is a small pond called Rakta Kundam. The legend behind this is that Lord Narasimha had washed the blood off his hands after killing Hiranyakashipu. The pond has a red shade and hence the name I suppose. I proceeded into the temple which is again located in a small cave like that of the other temples here and it has some 3-4 idols. The main idol is that of Shri Narasimha Swami holding Hiranyakashipu on his lap and ripping him apart. It is believed that this the exact spot where Lord Narasimha had killed the demon king Hiranyakashipu. After having the darshan, I joined Bilal and we started descending down the hill. 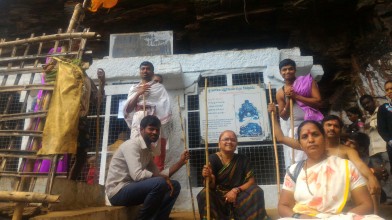 This time we took the other route and as always this route is quite easy to walk except that it’s a bit more rocky. On the way down, we came across a old saint and we were amazed by his power. After seeking blessings from him too we quickened our pace and reached the base of the hill from where we have to take a bus to get down to Lower Ahobilam. But we couldn’t find one and opted a free-hanging journey on the back of a 7-seat auto-rickshaw and this too is one of my most memorable journeys as I never tried one such before 🙂

From Lower Ahobilam, we took a bus back to Aallagadda and then to Tadipatri, from where I took a bus to Bangalore and Bilal to Anantapur. Thus ended my three days wild road trip and

06.00 hrs – I woke up when my alarm buzzed while my brother and Bilal were still sleeping. I started to get ready and in the meanwhile, they too got up and while Bilal was busy in checking how to reach Ahobilam and all, my brother went for a jog as his physical test for the Police selection was around the corner! We got ready quickly and left for Proddatur’s old Bus station from where we should get a bus to Allagadda and before doing that my brother insisted us to have our breakfast and we did so. We got into the bus and the distance to be covered is around 60 kms. We reached Allagadda around 10.30 hrs. From there, we took another bus which would be leaving to Ahobilam, located in Kurnool district and only then did we come to know that there are two places called the Diguva Ahobilam (Lower Ahobilam) and Eguva Ahobilam (Upper Ahobilam).

The bus-conductor gave us tickets till Upper Ahobilam. It was around 11.20 hrs we were at the Lower Ahobilam. Ahobilam is the place where there are nine different self-manifest (swayambu) deities of Lord Narasimha amidst the Nallamala hills. The sacred ranges of Nallamala hills are believed to be personified Adisesha whose head is Tirumala, middle portion Ahobilam and tail portion is Srisailam.

The nine manifestations are:

Aho-bilam literally means “wonderful cave” referring to the caves in which some of the nine self-manifest deities reside. The Puranas indicate that the Devas (Gods) saw the manifestation of Lord Vishnu as half-lion and half-man and shouted as Ahobala (great strength) as well as Ahobila (a huge cave where the current sanctum is present). It is the place where Lord Vishnu appeared from the Stone Pillar or Ugra Stambha to slay Hiranyakashipu and hence this place is called Ahobilam. According to another Purana, Garuda performed intense penance to have vision of Lord Vishnu and realized him here. And hence these hills are also known as Garudadri.

Our bus stopped just in front of the temple complex of Shri Lakshmi Narasimha Swami at Lower Ahobilam. The temple complex was serene and if we have enough time we would be visiting the temple on our way back. The bus soon came to life again and started ascending the hill. The snake-like road is carved in middle of the hills and the lush green trees all along the way makes the journey a pleasant one. Within no time, our bus reached Upper Ahobilam and we got down there. We searched for a cloak room to keep our luggage, but couldn’t find one. But there are few accommodations where the pilgrims can stay and we requested the manager over there to allow us to keep our luggage there.  Once freed from the luggage, we walked to find a route-map and there it was, giving each and every detail. In the meanwhile a guide approached us, but he asked us way too much and we dropped the plan of hiring a guide!

We started climbing up the hill. Initially there were a few concrete steps and it took us around 10 minutes to climb those. We reached the first temple situated in the Upper Ahobilam. This is the Ahobila Narasimha swami temple where the lord appears in his fierce aspect, called Ugra Narasimha. The temple is the main temple and earliest of all the nine temples in Ahobilam. The architecture is pretty much like the other South Indian temples but as told earlier this was a cave temple and the deity here is a Swayambu (self-manifestation). Just infront of this temple complex there is a mandapa, from where one can get the a nice panoramic view of the hills surrounding this temple. While Bilal stayed back, I went inside and took the blessings of the Lord!