Heard of the “Golden Triangle” of India? If not, here is a short brief on this 🙂 The “Golden Triangle” is a pilgrimage circuit which comprises of the Lingaraja Temple in Bhubaneshwar, the Sun Temple of Konark and the Lord Jagannath’s Temple of Puri. The last stop on the “Golden Circuit” Triangle – Puri is also one of the four great ‘Char Dham (the Purushottam Dham)’ pilgrimage sites and most sacred of India! I feel blessed for being arrived in Puri during a particularly auspicious time – the annual Rath Yatra or the Chariot Parade!

It was still raining by the time I woke up! Though it was a disturbed sleep all through the night, the charm of the city and the festival vibes that day made me feel positive 🙂 A perfect way to start a day! When came out the room to check on the guys, I was surprised to see Bhojnadh watching the rain holding a cup of hot tea in the balcony. Eshwar too was awake while Pappu still lay tucked inside his blanket. I asked the bell boy for a bucket of hot water for my shower and he simply rejected my request :-0

We got ready quickly and checked-out from the hotel to go to the temple. The roads were muddy coz of the rain and they were jam-packed with thousands of devotees who are proceeding towards the temple to catch a glimpse of the Lord Jagannath (God of the Universe). Every nook and corner is under the scrutiny of the Armed Forces, Para Military forces and the Odisha Police. The roads were filled up with barricades to regulate the movement of vehicles during these peak hours. Though we thought of parking our car near to the Railway Station, we ended up parking it on road-side, a little near to the temple. 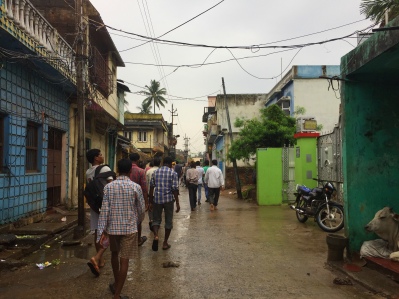 After walking through the narrow streets and alleys, we reached the Bada Danda or Grand Avenue of Puri on which the famous Rath Yatra takes place. The Avenue is filled up with shops of all kinds and various ashrams for the pilgrims. Volunteers were providing drinking water, lemonades and fresh food to the thronging pilgrims and tourists. Further towards the temple, a huge crowd of people were competing to stand as close as possible to the temple in order to get a better view of the deities.

We too started walking towards the huge mass of people. The security forces had cordoned off the place near to the temple for around a distance of 800 mts. As we were closing nearby, we got the first glimpses of the mighty chariots and the temple tower. The great Jagannath Temple of Puri was built in the 12th century atop the ruins of the Gundicha temple by the progenitor of the Eastern Ganga dynasty, King Ananatavarman Chodaganga Deva and the temple complex covers a huge area of over 400,000 sq ft. The temple tower, built on a raised platform of stone to a height of 214 feet above the inner sanctum, is truly dominating the surrounding landscape.

The temple style here is quite different – it is mainly dominated by colossal cylindrical and pyramid-shaped towers rising skyward in multiple tiers, covered with elaborate stone carvings. A striking feature of the Jagannath Temple is the flag atop and it is said that it always flaps in the opposite direction of wind. Yet another one is the wooden deities! In most of the Hindu temples the icons of the deities are either made out of stone or metal, but here it’s wood and this is replaced every twelve or nineteen years ceremoniously.

Owing to the Rath Yatra, the temple is closed for pilgrims and entry into the temple on normal days is restricted only to the Hindus. This is the only occasion when people of all castes and creeds can catch a glimpse of the gods and hence the annual Rath Yatra draws close to a million of devotees all over India and the world!

06.05 hrs – We were on the road trying to get an auto-rickshaw which can take us to the famous nearby village Shani Shingnapur. Our auto-driver earlier who dropped us at the temple told us that the auto-wala would charge a sum of Rs. 120/- for a to and fro journey from Shirdi to Shani Shingnapur. I think that was the first auto which was ready for it’s first trip of the day 🙂 And there we were telling them the same old story that we don’t have any money left with us, but want to visit the other temple 🙂 😀 . Thanks to demonetization once again 🙂

The auto was getting filled infront of us, but we were still struggling to convince the auto-driver to find out ways to take us there. Finally, we came with our brilliant idea of swiping our debit cards at any petrol pumps 🙂 . The old driver thought of it for a moment and told us that he would be getting his tank filled by swiping our card and would return the balance amount after our ticket-charges. It seemed to us like hitting a jack-pot. Hurrah! He is gonna give us some hot ready cash in our hands which is very much essential to carry on with our forward journey from Shirdi 🙂

At last, we settled down at the rear end of the auto-rickshaw and the driver brought the engine to life. It was still dark outside and Mythri and I started eating the prasad. Once finished, we dozed off, but couldn’t get a nice lap, as the condition of the road was too bad and there were bumps all the way. It took us almost 1.5 hrs to reach our destination. 08.00 hrs – Our auto stopped infront of a shop from where we can buy the things like oil and flowers to offer at the temple.

Hinduism considers that the planets in our solar system have an impact upon our physiology, psychological structure and the context of our lives. Hence, Hindus consider these planets as forms of different energies and had constructed temples for them. Shani or Saturn, son of the Lord Surya, is considered to be the lord of dominance, distress, depression, disease and disaster. The Indian astrologers, based upon the birth place and time of birth and some other facts calculate when the impact of Saturn can be more in our lives which is known as ‘Saade Saati’ or ‘Yellanati Shani’ (in Telugu), which will last for seven and a half years.

In this phase, one may become more susceptible to depression or distress and in order to bridge those pits, various processes and rituals are associated with Shani temples. These are the temples where Saturn is personified as a God. And Shani Shingnapur is one such temples in India. This temple is not of the regular architecture which one can see throughout India, but the deity is in open space. The deity here is a 5’9” idol made of black stone, mounted on a raised platform in an open place. Usually in every other temples which I visited so far, Lord Shani would be in a sculpt form, but here it is in the form of a stone.

According to Hindu tradition, oil is poured onto the idol of Lord Shani in any temple. Here, there is a large bin in which we can empty the oil packets or bottles and the oil would be poured directly on top of the idol as it passes through the pipes that are connected to the bin. We went around the temple complex after the aarti. Legend is that the idol flowed along with the flood waters and struck in the bushes and a local shepherd tried to release it, and when he tried poking it, the idol started bleeding and the villagers left the idol at the same place after this incident. Later that night, Lord Shani Dev appeared in a villager’s dream and told that it was he and the other morning, the villagers cleared off the bushes and erected the idol and started offering pujas.

But why a lockless village? Coz, the houses in this village doesn’t have any doors and latches, except that they hold some curtains. It is believed that Lord Shani Dev protects the village and no theft will occur here. They villagers also say that if ever a thief attempts to stole something, he goes blind and the things would be intact at the same place as they were placed before. The most astonishing thing is that even the bank and the police station in this village keep up with the tradition and has no locks. It is also a zero-crime village!