09.00 hrs – I was on my way to Amber or Amer Fort. The tuk-tuk ride was not bad at all; in fact, am enjoying it! 🙂 Whenever we hear the word Rajasthan – the first thing that comes into our mind would be the courageous Rajputs! It is also simultaneously known for another thing – its hill forts which bears testimony to the power of the Rajput princely states that flourished in the region from 8th to 18th centuries. Can you just imagine that six of Rajasthan’s hill forts have made it to the UNESCO World Heritage List? I got the first glimpse of the mighty structure while I was still some 2 kms far from the magnificent Amer Fort.

Amer Fort is situated in a town called Amer, the old capital of the Kachhwahas, and is located at around 11 km from Jaipur. The fort is set amidst picturesque and rugged Aravali range hills and was constructed during the 16th century. My tuk-tuk was stopped at the pathway that leads to the fort. Just beside the path is an artificial lake called the Maota Lake, whose original name was “Mahatva” and is spread in an area covering around 80 thousand meters. And the pathway is through a beautiful Mughal style garden known as “Kesarkyari Garden” or “Mohan Bari”.

There are two options to go upto the fort from the foothill. Either you can comfortably mount onto an elephant, and the beast would do the climbing for you or simply climb up by yourself 😉 I chose to climb by my own! It’s not a tough climb, but the sultry temperature truly drained my energy out of me 🙂 Though the temperature dropped due to the onset of winter, it was still hot and humid! Lots of Indian and foreign tourists, vendors selling caps, souvenirs, food stuff, and the mighty beasts cutting through the thronging tourists – it was a hell of activity!

After 15 minutes, I was at the main entrance of the fort called the Suraj Pol or Sun Gate as it faces east. This fort was divided into four divisions and each division is called as a courtyard. The Suraj Pol leads us into the courtyard called Jaleb Chowk, which is a huge open ground and was used by the armies to hold their victory parades. The original palace was built by Raja Man Singh and the additional extensions were built by Maharaja Mirza Raja Jai Singh and Sawai Jai Singh II who shifted his capital to Amer in 1727. Here we have to buy a ticket in order to enter the other courtyard and for Indians the ticket costs about Rupees Fifty.

I moved towards another gate called the Singh Pol or the Lion Gate leading to the second courtyard called the Diwan-i-Aam or the Hall of Public Audience. This is the place where the Raja gave audience to his subjects and met his officials. This building was constructed on the orders of Mirza Raja Man Singh in red stone and marble. The striking feature of this structure is the pillars. They support the roof by two rows of columns. The outer ones, in coupled pairs which are of red sand stone and the inner ones are of cream marble. 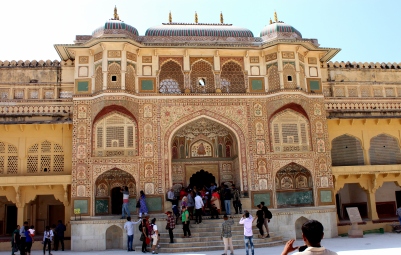 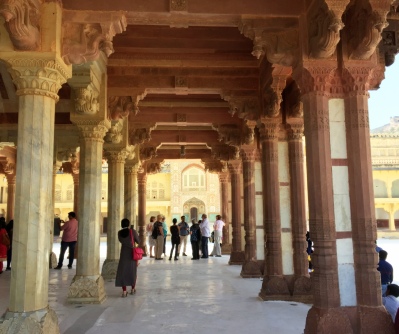 I moved towards the Ganesh Pol or the Ganesh Gate, which provides access to the inner and private chambers of the palace. Ganesh Pol is an architectural marvel with its exquisitely painted and carved walls. Amber Fort is known world over for its artistic Hindu style architecture influenced by the Mughal architecture. Constructed of red sandstone and marble this massive fort is remarkable for majestic grandeur and is a sight to behold! Just above the Ganesh Pol, is the Suhag Mandir used by the royal ladies to witness the functions held in Diwan-i-Aam. 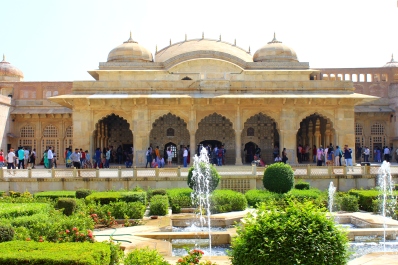 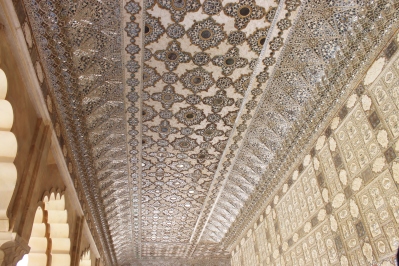 Ganesh Pol leads us to one of the main attractions of the Amber Palace called the Diwan-i-Khas or the Hall of Private Audience. It was constructed during the period of Mirza Raja Jai Singh and was also called as Jai Mandir after him. This is also called the Sheesh Mahal or Glass Palace as the ceiling of this structure was filled up with convex-shaped mirrors. The other prominent structures are the Sukh Niwas (Pleasure Palace), where the king used to retire for sleep, the hexagonal shaped Mughal style garden constructed by Raja Jai Singh I.

The last or the fourth courtyard is the Zenani Deorhi or Ladies’ Apartments in which the queen-mothers and the Raja’s consorts lived and it also housed their female attendants. Jas Mandir is the temple where the royal women worship. Architecture lovers, photo enthusiasts and historians – here is something which you should not definitely miss! 😉 Before moving onto the next place, I charged myself up with a glass of iced-tea from the Cafe Coffee Day located in the palace itself which also offers a beautiful view of the town behind it! 🙂