It was another sunny day. Today’s plan was made out by Sahil. He just knows that there is an unseen place which we should explore. Though he is also not sure what exactly is out there, he was somehow so much interested to go out there. So, it’s decided. We are going to begin our quest; quest for the unseen place.

Most come to Andaman for its beaches, but few explore the hidden beauty of these islands. We are in one such quest now. We weren’t even sure where to go and how to find out that hidden treasure! All that we know are we needed to reach Bamboo flat. One can get a ferry from Port Blair or a boat to reach Bamboo flat. Instead of opting for a ferry, uncle hired us a speed boat so that we can reach the other end in less than 20 minutes or so. On the way to bamboo flat, don’t forget to see the floating dockyard. We can also see the Ross Island from the middle of the channel.

Sahil quickly made an inquiry with a jeep driver and asked if he can guide us to the place we were searching for. Luckily, the driver who is also a local guide told us that he knew the place and was ready to take us over there. We passed through few settlements, which typically reminds us a small village (paraschatan) and in less than another 30 minutes, we reached a place at which our driver stopped the jeep and asked us to follow the foot track on the right side of the road. 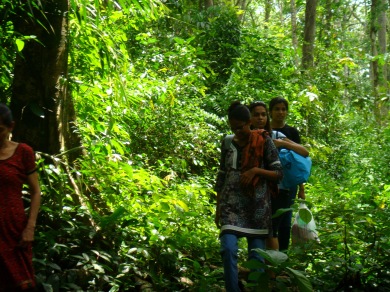 Soon we were out of the jeep with our stuff, and asked if the driver is also going to accompany us. He said he would in sometime. We weren’t still sure of what we were behind 🙂 . We were on the track, the track was slippery with mosses and the shrubs that covered the path; and the broken pipes probably supplying water to the settlements were leaking at some places making it more difficult for us to walk. But, we were moving on. The forest was quite calm except for the chirps of the birds and us.

The foot track is narrow and offers an amazing glimpse of the deep forests. After some 200 mts we were at a stream which we have to cross to reach the other end. The cool waters of the stream were so soothing and there were few rocks around where on which we can sit and relax. The next crossing came pretty sooner and then the third and the fourth. The fourth is a bit deeper; I mean it’s up to our knees.

Everyone is eager to find out what is going to be there and what are we searching for. After another 45 mins trek up hill, we reached a place, which is the end point of the quest. The trek finally culminated at a water fall. The water fall called Wimberly Gunj waterfalls, which is located so deep in the forests and the lake which is formed below it in which we can swim is simply enchanting. Looking at the scene, we forgot our tiredness and soon were into the waters. 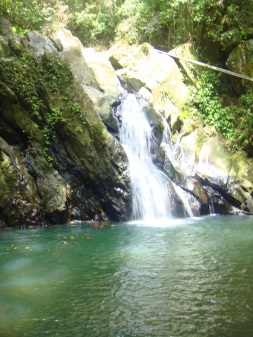 The experience was so thrilling. This quest turned out to be the best part of the entire trip. The trek through the deep forests, the stream crossings, the water fall and the serenity of the surroundings is truly a lifetime experience. Thanks to Sahil for taking us to this hidden beauty 🙂

The quest ended, but not my day! Wait and watch 😉