It was in 2016 when I witnessed Attukal Pongala for the first time and didn’t know the importance of this mega-event at that time! In 2017 I couldn’t attend it as I was away and this year, I made a point to not miss this festival. But why? Coz this ritual had made it to the Guinness Book of World Records for being the largest religious gathering of women on a single day in 2009. The festival falls on Karthika star of the Malayalam month of Makaram or Kumbham, which usually falls in February of March, and is celebrated for 10 days. The Attukal Pongala takes place on the 9th day when women offer Pongala – a sweet dish to the Goddess. 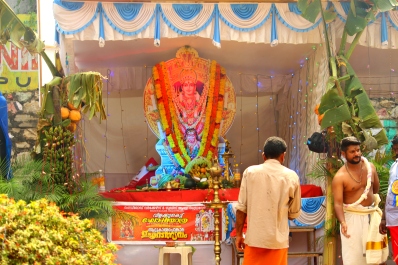 According to a legend, the Attukal Pongala festival commemorates the hospitality accorded by women in the locality to Kannaki, the divine incarnation of the heroine of the Tamil epic ‘Silappadhikaram’ while she was on her way to Kodungalur in central Kerala after destroying Madurai city to avenge the injustice to her husband Kovilan. It is said that she stopped at Attukal for a day’s rest where the local women offered her rice and jaggery for lunch. The temple, located in the heart of the city, is dedicated to Attukal Bhagavathy, believed to be an incarnation of Kannaki. 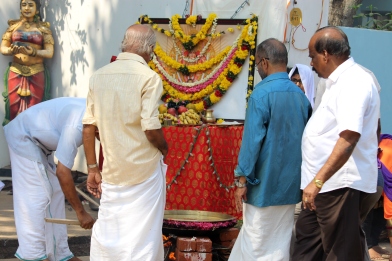 The Attukal Pongala fell on 02nd of March this year. One week before the commencement of this Annual festival, streets of the capital city of Kerala were lined-up with make-shift shacks selling mud pots, bricks, wooden ladles, the loud-speakers of all temples came alive, and many miniature shrines were erected at almost all the junctions. People from all parts of Kerala arrived into Thiruvananthapuram days in advance to secure a hearth close to the Attukal Bhagavathy Temple and mark their spaces to have their make-shift brick stoves on which they would prepare ‘Pongala’. 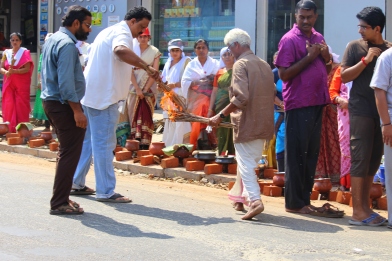 It was 05.00 hrs in the morning on 02.03.2018 and I started stirring up in my bed when the women downstairs started making their preparations. Almost all the men will be hooked up to their homes while the women would be on streets in their new golden bordered Kerala Kasavu sarees. When I stepped out of my home, a long row of brick-stoves with mud-pots and bronze vessels neatly placed on top of them caught my eye. After making my visit to the nearest Goddess temple, I made my way to my office by-passing the many women devotes who are waiting patiently on either sides of the road braving the hot sun. 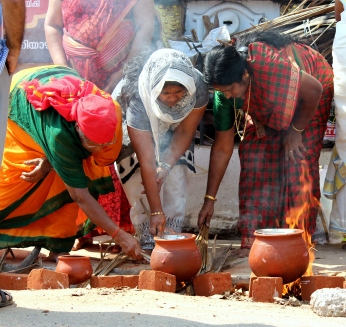 I could see some of our staff along with other women ready with their hearths near to the Ganesha temple. All were busy with washing rice, grating jaggery and crushing cardamom while the temple authorities were keeping a check on their wristwatches and waiting earnestly for the auspicious time. The rituals actually begin when the chief priest lights up the main hearth of Attukal Bhagavathy temple with fire brought from the sanctum sanctorum of the temple. Finally at around 10.15 hrs, the chief priest of the Ganesha temple lit the temple’s hearth and the fire has been passed on to the other hearths by the burning fronds. 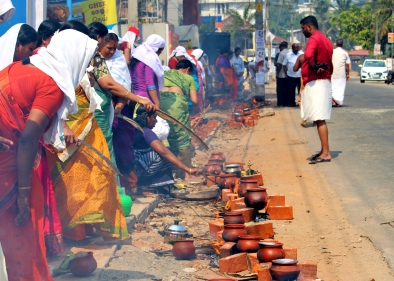 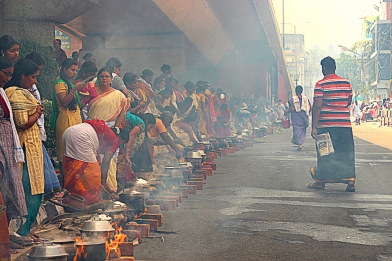 The women were into immediate action. Soon the roads were covered with the smoke from the brick-stoves, women turned into a shade of pink due to the hot sun, heat emanating from their stoves and coughs stirred up. I myself found to have a running nose and eyes because of the smoke. Though the sun was blazing like hot molten lava, it couldn’t break the determination of these women devotes. As if pleased by their devotion, the sky was filled with clouds and a cool breeze started to flow. Breaking away from the temple road, I walked towards the junction. 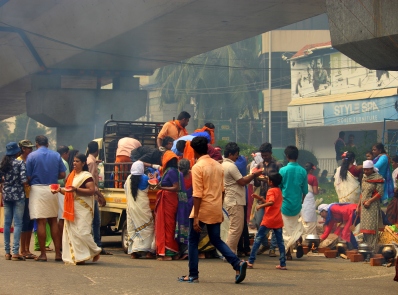 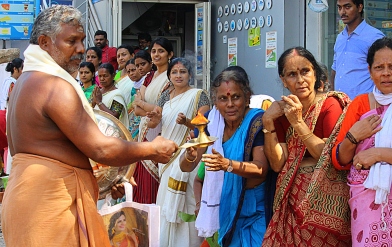 Here too, the situation is more or less the same – women were cooking, volunteers were helping, police personnel were overlooking the activities. Few women started ululating when the contents of their pots were overflowing and praying silently. When asked a lady she went onto say that when the contents in the pot boil over, it marks prosperity and they ululate to thank the Goddess for that. Most of them started to rest after preparing Pongala, which is rice cooked with jaggery and coconut while few others went onto prepare few more delicacies like the Manda Puttu – a green gram delight, Therali Appam – a dish that is steamed in aromatic bay leaves and Aravana. 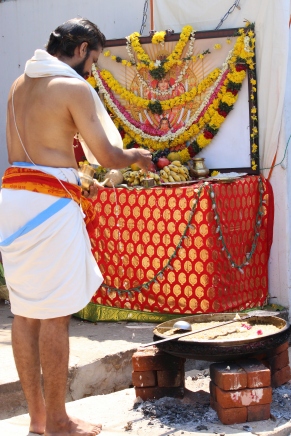 It’s time for them to go home. It was 14.00 hrs and I could still see the anticipation in everyone’s eyes as the time for the final ritual for the day was approaching. It’s the Nivedhyam (offering ceremony). When the signal came at 14.20 hrs, the chief priest sprayed some holy water over the temple’s utensil containing the Pongala and thereby making it into a holy offering which would be distributed later to the devotes. Later, he went onto spray the holy water over all the pots of the devotes marking the end of the ritual. I too took my share of ‘prashad’(holy offering) before I left to my home 🙂 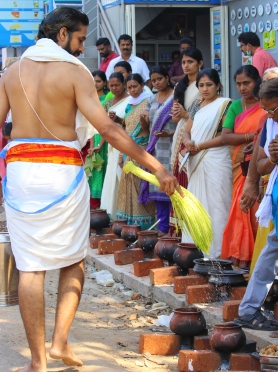