Agra is truly a fortified city. One can find some sort of palaces or forts everywhere around the city. Sometimes, the houses too look like forts or quarters inside a fortified city. Our next visit is to the Agra’s Red Fort, most commonly known as the “Agra Fort” which was built by the great Mughal emperor Akbar in the 16th century. The fort, a UNESCO World Heritage site, described as a “walled city” is huge with its wall standing at a height of 70 feet. It was still raining when we reached here and entered the main gate known as the Delhi Gate; we bought the entrance tickets at the office which stood by the entrance.

Somehow, I was more impressed with the Agra Fort than the Taj, I don’t know why though! It might not be as famous as the iconic TajMahal, but it is every bit beautiful. It was altogether a different monument than the Taj. Much bigger, as attractive as the Taj, might be less cared than the TajMahal.. A lot of contrasting things! Soon we passed through the Hathi Pol or the Elephant Gate which leads to the walkways and then to the inner chambers. There are lots of rooms, each of them different, but all of them enormous. 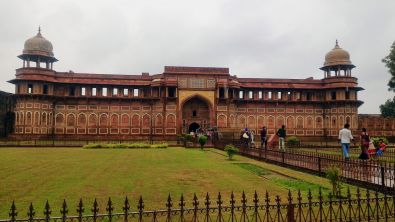 The extensive women’s quarters, vast open areas perhaps where the rulers conducted the durbars (meetings), indoor water cascades and fountains, massive gardens etc makes up most of the interiors of the fort. There is even an enormous square right in the middle of the fort where the Mughals installed a great deep pool.  To my surprise, there was even a prison sort of thing in the inner chambers and it was said that the son of Shah Jahan allegedly locked him up in a section of this Fort, where he lived for the last eight years of his life watching the TajMahal in a distance. 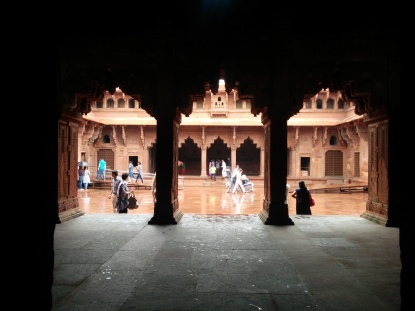 This fort is a home to a number of palaces such as the Jahangir Palace, built by Emperor Akbar for his son Jahangir and Shish Mahal which was designed with tiny mirrors in its walls and was often used as a dressing room, the Khas Mahal which is built of white marble built by Shah Jahan for his daughters Jahanara and Roshanara. Also the fort is a place for beautiful mosques, Mina Masjid and Nagina Masjid. The balcony has the beautiful view of the Taj and the Yamuna River. Might be these are all the reasons behind me getting attracted to this Fort more than the Taj Mahal. Perhaps the life in these palaces and rooms once upon a time gave me that feeling of liveliness. Nevertheless, am fascinated by this place.

We were out by 2.30pm and resumed our back journey. On the way we stopped at the most famous chain of restaurants “The Pind Baluchi” for lunch. I would never suggest this place to anyone as they don’t have many of the items on the menu and the service was poor 😦 . The traffic was still heavy on the roads and we stopped at a small sweet shop on the roadside to have a sweet. And I chose Rasamalai, which is one of the best I have tasted so far. So light, not so sweet and fresh 🙂 🙂 . As I was not so fond of sweets, I didn’t try the most famous Agra Peta.. Might be next time, but for now it’s time to go home!