Lakshadweep in Malayalam means ‘a hundred thousand islands’, though there are no 1000 islands literally. It is the smallest Union Territory of India and the archipelago covers an area of 32 sq.km which is surrounded by 4200 sq.km of Arabian Sea. It has 12 atolls, five submerged banks and 36 islands of which  Agatti, Amini, Andrott, Bitra, Chetlat, Kadmat, Kalpeni, Kavaratti, Kiltan, Bangaram and Minicoy are inhabited. Lakshadweep shot into the lime-light in the late 1980s after Rajiv Gandhi’s brief encounter with a whale in Bangaram. I don’t how far this is true frankly 😐 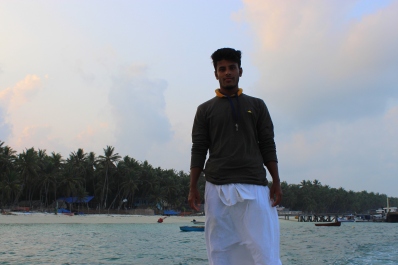 The turquoise blue started disappearing and a dark blue color started engulfing the waters. Agatti island is vanishing in some distance and soon we were in middle of the deep Arabian Sea! Lakshadweep islands are a paradise of marine life with lots of foreign tourists dropping in for various water sports and adventure activities. And ofcourse, the Laccadive islands was just one of the several possibilities, if one scouts the right destination to start a new fishing operation. In fact, a group of 10 Germans boarded the same flight as I was with their fishing gear and it was their second visit to the islands it seems. So, one can understand how famous is fishing here! 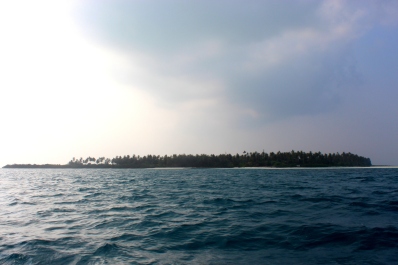 As I am a budget traveler and cannot afford a proper fishing expedition, I wanted to go along with the local way of fishing 🙂 . Fishing is the main occupation of the islanders with tuna being the main fish. And it’s a true adventure too. The fishing season starts in November and runs until mid-April. I told Jaleel to ask the boat owner to help us in our fishing adventure and he readily agreed with a smile on his face. He called up his two sons and asked us to make the necessary arrangements. After a thorough search from the large wooden box placed in our boat, the two guys emerged with two small card-boards which looked like small sized chopping boards. 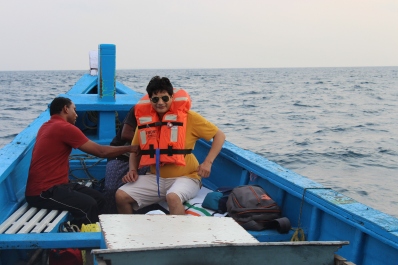 Each of these card-boards are wrapped with a nylon string of some 40 meters length with one end tied to the cardboard and the other end is tied to a fishing hook. The two youngsters gave me and aunt a cardboard each and explained us how to throw the fishing hook behind the boat and hold the string through our fingers. One has to be to cautious while holding this string as this can easily cut through the skin due to the momentum! Jaleel came and wrapped a hand-kerchief around my fingers to protect them from any injuries and I sat on the edge of our boat waiting eagerly for a fish to bite my fishing hook 🙂 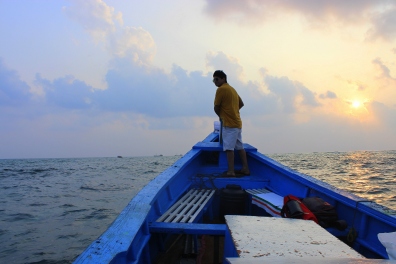 Time for some theory. Jaleel started explaining the various methods of fishing practiced by the islanders and some of these are unique to the islands. As I told earlier, tuna is the main fish occupying some 80% of the total landings out of which 60% will be exported and 40% will be consumed locally. The local fishermen practice a unique way of fishing. They catch small fishes (baitfish) near the island keep them alive in a container before proceeding out to the sea. Once they spot the tuna, the small fishes are released into the water and simultaneously water is sprayed with a small pump. This spray of water, apparently, fools the tuna into believing that there are a lot more small fishes.

The fishermen stand shoulder to shoulder on the rear deck bobbing long poles with barbless hooks into the spray, enticing the tuna to bite. As a tuna comes onto the line a skillful fisherman will use the momentum to lift the fish out of the water, arcing it overhead to land on the deck behind him while he flicks his line back out into the water, all in one smooth movement. Gradually the hold fills with tuna, and the bait well thins out. This is called the “Pole and Line” fishing, a unique fishing method for the exploitation of tuna and is only found in Lakshadweep in the Indian continent. He further added that the fishing conditions and results may naturally vary during the season.

But today no unique fishing techniques are being deployed :-p . In the meanwhile, Imran came to us saying that if I get a fish he would be cooking it for his lunch 🙂 . It was almost 30 minutes since I dropped my fishing hook, but no fish was caught so far. My curiosity started to disappear and I handed over the string to Imran. Imran too was bored within few minutes and he handed back the string to me. After 5 minutes, I suddenly felt a jerk in my hand. Hurrah! My string was being pulled away from me and I called Jaleel with excitement. Soon, Jaleel and the other two youngsters came to me to check whether there is something. 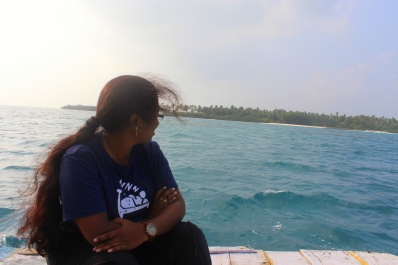 To my surprise, they confirmed that the hook has struck something, but they were not sure whether that’s a rock or a fish. But soon, when they started pulling off the string, one of them confirmed that it is a fish and our boat was stopped. It was a fish and it took quite some effort to pull it, but to our utter disappointment when he was about to pull it off completely on board, the string got struck into the rear of our boat and got cut 😦 and the fish was lost along with the hook 😦 . I felt sorry for them as they lost their fishing hook and made a point that I would buy them a new one when we will be back on the island! 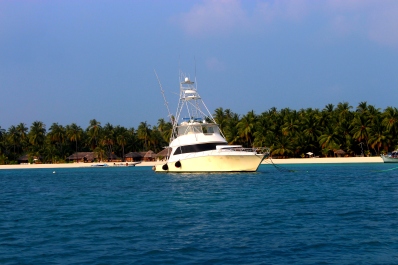 Though the fishing part was a little disappointment, we were happy as we spotted some flying fishes and sea gulls following our boat for sometime. Soon, we spotted two islands and one of them is surrounded by a large lagoon and the captain announced that it’s our destination. We entered the lagoon and the water was crystal clear and one can see the undersea rocks and the sea bed so clearly. Never ever I thought that there would be such a beautiful place on this earth. The beauty of the island and the lagoon is beyond description!