Vardhamana Mahavira (590-510 BC) – Mahavira is regarded as the man who gave Jainism its present day form. According to Jain tradition he was the 24th and the last Thirthankara. He was born of Siddhartha, the chief of the principality of Vaishali Videha(Bihar) and queen Trisala. The child was named Vardhamana (the increaser) as the prosperity of the kingdom is said to have grown manifold after its birth. Even as a boy Vardhaman performed prodigious feats of valor ad so was called Mahavira (Great Hero). But he renounced the world when he was thirty and joined a sect of mendicants who traced their origin to Parsvanatha. Later he left them to wander alone. In the thirteenth year, Vardhamana is believed to have attained enlightenment. Mahavira’s philosophy has eight principal cardinals – three metaphysical and five ethical. The objective is to elevate the quality of life. These independent principles reveal an exceptional unity of purpose, and aim at achieving spiritual excellence by ethically sound behavior and metaphysical thought. Mahavira’s metaphysics consist of three principles: Anekantavada, Syadvada, and Karma; his Panchavrats are five codes of conduct : Ahimsa, Satya, Asteya, Brahmacharya, and Aparigraha. Mahavira’s sermons were orally compiled by his immediate disciples in the Agam Sutras. These Agam Sutras were orally passed on to future generations. He created a large and loyal monastic/ascetic/mendicant community inspired by his teaching. At the age of eighty, he attained Nirvana. 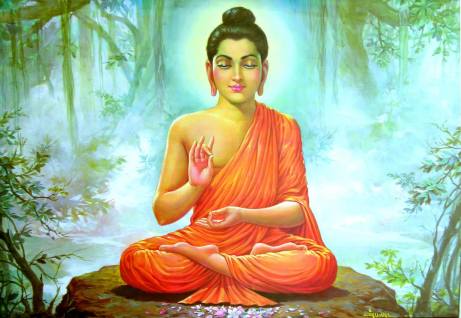 Gautama Buddha (563-483 BC) – Gautama, also known as Shakyamuni (‘sage of Shakyas’), is the key figure in Buddhism, and accounts of his life, discourses, and monastic rules were said to have been summarized after his death and memorized by the Sangha. Tripitaka is the collection of teachings attributed to Gautama. He was born inn 563 BC at Lumbini to king Sudhodhana and Queen Maha Maya of Kapilavastu. He was brought up by his mother’s younger sister Maha Prajapati. As he reached the age of sixteen, his father arranged his marriage with Yashodara and in time, she gave birth to a son Rahula. Siddhartha spent 29 years as a prince in Kapilavastu. Siddhartha felt that material wealth is not the ultimate goal of life. At the age of 29, Siddharta left his palace in order to meet his subjects. Siddhartha initially went to Rajagaha and began his ascetic life by begging for alms in the street. After asceticism and concentrating on mediation and Anapana-sati, Siddhartha is said to have discovered what Buddhists call the Middle way – a path of moderation away from the extremes of self-indulgence and self-mortification. Under the Bodhi tree in Bodh Gaya, at the age of 35, he attained Enlightenment. Gautama from then on, was known as Buddha or ‘Awakened One’. At this point, he realized complete awakening and insight into the nature and cause of human suffering which was ignorance, along with steps necessary to eliminate it. These truths were then categorized into the four noble truths; the state of supreme liberation – possible for any being – was called Nirvana. His religion was open to all races and classes and had no caste structure. At the age of eighty, he attained Parinirvana or the final deathless state.

Adi Shankaracharya (788-820) Philosopher known for his contributions to the doctrine of ‘Advaita Vedanta’. a sub-school of Vedanta. Born in Kalady, Kerala, Shankara proved to be a child of prodigy, mastering the four vedas at the age of eight. Inclined towards leading an ascetic life from a young age, he left Kerala and traveled towards north. While travelling across India to propagate his philosophy, he founded four monasteries or ‘mathas’, uniquely contributing in the historical development, revival and spread of Hinduism and Advaita Vedanta. His works include commentaries, philosophical treatises and devotional hymns, the most notable of them being the commentaries that he wrote on the ten major Upanishads, Brahma Sutra and Bhagavad Gita. Adi Shankara played an instrumental role in the revival of Hinduism, at a time it had begun to decline because of the influence of Buddhism and Jainism. Though he lived for only 32 years, his striking impact on Hinduism and India is underscored by the fact that his doctrine is followed by a sect even to this day.

Sri Aurobindo Ghose (1872-1950) A nationalist, scholar, writer, poet, literary critic, philosopher, social thinker, visionary and yogi, the list of epithets run into several lines to mark someone like Sri Aurobindo. After a short political career, which saw him become one of the most revered leaders of the Indian freedom movement, he devoted himself completely to his evolving spiritual mission, eventually giving shape to his vision in Pondicherry, for the rest of his life. Born on Aug 15, 1872 in Kolkata, Sri Aurobindo was named Aurobindo Ackroyd Ghose by his father Dr. Krishnadhan Ghose. He completed his education from St Paul’s in London and later from King’s College Cambridge. On his return to India in 1893, he rendered administrative and educational services to the State of Baroda. During this period he prepared secretly for revolutionary political activities. Soon he came to the forefront of political affairs as his editorials in the daily Bande Mataram made him a national figure. Sri Aurobindo was kept in solitary detention from 1908 to 1909 during which he went through some decisive spiritual experiences. In 1910, he retired from active politics and left to Pondicherry, in an answer to an ‘Inner call’. From that time onwards till he left his body on 5 Dec, 1950, Sri Aurobindo along with his spiritual collaborator known as the Mother, remained at the center of the Sri Aurobindo Ashram, which is not a retreat for ascetics or retired men but a veritable experiment working on the transformation and perfection of life.