Kochi, popularly known as the ‘Queen of the Arabian Sea’, is a heady mix of colonial influences and can take anyone by surprise. It draws its unique textures from its rich multi-colonial history, and from the fact that it was the seat of the Kingdom of Kochi.

06.30 hrs – Time to be out of bed, but before that I checked my mobile and there were some 20 missed calls and 200 messages conveying the New Year wishes! I called up my dad and mom and wished them a very happy new year! Then replied to everyone who left me a message and completed my daily chores to leave for the day. 07.45 hrs – I deposited my room keys and headed towards the main road to have my breakfast. There is this Aryaas Restaurant just outside the Ernakulam South Railway station and I settled down for a quick bite. Ordered for a masala dosa, and I would definitely recommend this restaurant to everyone as the dosa is so fine and crisp and the chutneys were also good 🙂

08.20 hrs – All this while in the restaurant, I tried booking a cab on Ola as well as Uber, but failed 😦 . So, I thought that it’s better to catch a bus to Fort Kochi, rather than wasting my time in booking these cabs. I got into an auto-rickshaw and asked me to drop at the bus-station, which he did. From there, I ended up taking another auto, who agreed to drop me at Fort Kochi for Rs. 140. Bargain is the mantra! 🙂 The driver is from Karnataka, married to a Malayali and was able to speak Telugu. Good to hear that 🙂 . He showed me almost all the major landmarks along the route and shown me the bus-stop from where I could catch a bus to Trivandrum!

08.45 hrs – Here, I am. In Old Kochi! Old Kochi is home to the heritage precincts of Fort Kochi and Mattancherry. While the mainland Ernakulam bustles with a modern skyline, it is the original island of Kochi, now informally called Old Kochi, unfolds as a mesmerizing mosaic of varied colonial influences. History says that in 1503, the Rajah of Kochi granted the Portuguese permission to build a fort near the western seafront of Kochi island, and the stronghold went on to give that part of the island its name – Fort Kochi. Though the fort walls no longer exist, the name Fort Kochi continues to identify the compact area that enjoys a European flavor.

08.50 hrs – My first stop is the Chinese Fishing nets. Lining the shore, these Cheena Vala (known in Malayalam) are permanent cantilevered fishing nets operated by agile men using heavy stones. The sight of these bamboo-and-rope nets silhouetted against a lightening sky and slowly dipping into the water is mesmerizing. It is said Chinese traders had originally put up these nets in about the early 15th century, giving them their unusual name. These were being operated by the time I was there and the fresh catch is being sold then and there itself. A good sight to watch 🙂

I started walking along the Vasco Da Gama square, which is a narrow stretch of promenade along the beach where one can actually observe local fishermen working upon those massive cantilevered fishing nets. Aptly located by the seafront, its name speaks of the intrepid adventurer who, credited for reaching India by circumnavigating Africa, had arrived in Calicut, Kerala, in 1498. From here, one can get the best view of Kochi harbor, one of the finest natural harbors in the world and once a bustling port which witnessed the arrival of the Arabs, Chinese, Portuguese, Dutch and the British.

As I reached the Fort Kochi Beach, I witnessed the remains of a giant Pappanji which was burnt down to ashes the previous night. Well, one might be surprised to hear this. Let me explain it a bit! Pappanji (a Portuguese word meaning an old man) is a giant statue of an old man, which is burned exactly at stroke of midnight of 31st December every year. This signifies the end of a passing year and welcome New Year. History says that its origin lies in the influences of Portuguese and it symbolizes the burning of all the ills and beginning on a new note.

While I was watching the distant sea and wishing someone over my phone, I saw some dolphins jumping and bouncing 🙂 . The sight excited me and when I was ready with my camera to catch a glimpse of them, they stopped jumping and started swimming. Lol! 😀 😀 . Walk for few more minutes, landed me up at one of the icons of Fort Kochi – the St. Francis Church, which is believed to be India’s oldest European -built church. This Church was originally built in wood by Portuguese Franciscan Friars in 1503 and was later rebuilt in stone during the mid-16th century and now a protected monument.

It was dark inside and the only source of light are the windows of the Church. I admired the old-charms of the church – the wooden carvings on the pulpit and gabled roof, the pews, some inscriptions on the walls. But, I was more fascinated at seeing the place where the renowned Portuguese explorer Vasco Da Gama was laid to rest after his death in Kochi in 1524. Later, his remains were shifted to Lisbon. A must visit for the history lovers. And now, it’s time to have something to gain energy so that I can roam more 😀 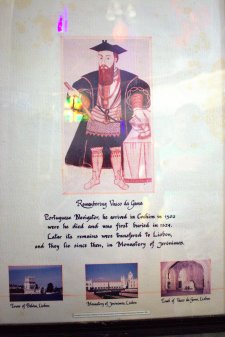 My next stop is Kashi Art Gallery. I asked people for directions and started walking through the narrow lanes of Fort Kochi. This place is quite different from the rest of the places. Neatly designed lanes, colorful houses, beautiful flower pots hanging to the roofs or infront of the houses, lots of museums, antique shops, hotels, cafes and restaurants. Wow, it’s a complete package for any tourist! But the thing which attracted me the most is the Street Art. 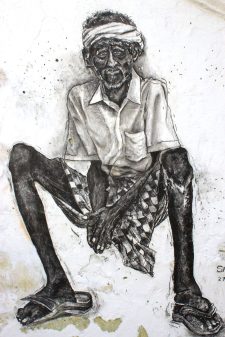 Street art has for long been a part of India’s culture. Take the rangoli, elaborate pretty patterns that are drawn infront of homes, for instance, or political graffiti and filmy posters that brim with color and style. In places like Fort Kochi, Goa and Pondicherry, the colors of homes are in beautiful shades of yellow, green, blue and pink. The walls, roads and even the tree trunks were not spared here and were filled with colorful graffiti and carvings 🙂