Today’s destination is not a new one for us, but it’s just that we didn’t see it closely. We are seeing it from the day we landed in Port Blair. Probably most of you might have guessed it correctly. Yeah, it’s the Ross Island :), an island which is in the nearest proximity of Port Blair. It takes just few minutes (around 10 or 15) to reach Ross Island by a ferry from the Phoenix Jetty of Port Blair.

Unlike other islands, this island has an entry fee of some Rs. 20 I think, sorry for not remembering exactly 🙂 . Ross Island now being controlled by the Indian Navy requires every visitor to sign in on entering. On entering, the island made me nostalgic as it suddenly took me back to the colonial past. Ross Island, the erstwhile capital of Port Blair during the British regime, is one of the seats of British power. It now boasts of breath-taking ruins and an interesting journey to the past.

Named after the British marine surveyor Daniel Ross, the island was known as the ‘Paris of the East’. The mesmerizing ruins of the swimming pool, printing press, club, church, Hospital, Bakery, Tennis court, Chief Commissioner’s House and other beautiful buildings provide a glimpse to all the modern amenities, the British brought with them.

The island with historical background and preserved ruins is spread along an area of 0.6 sq kms. This island remained under British occupation till 1942. From 1942 to 1945, the island was under the occupation of Japanese. However, the allies reoccupied the island in 1945 and later abandoned it. Hence we can find some bunkers and if our luck worked out, might be some canon balls or bombs can also be seen 😉

The island was abandoned at a later period of time as it was hit by an earthquake. And slowly, the nature took its toll on this island, as the Banyan trees engulfed the buildings thus replacing the structures created by man. The specialty of this island is all about the wildlife which we can see here. There are some hundred deers and peacocks which just roam along with us. They are accustomed to human life 🙂 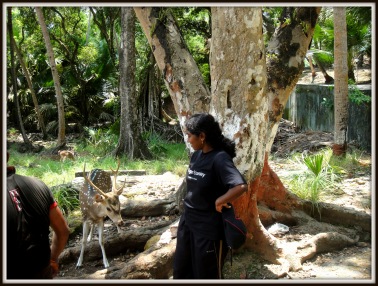 There are walkways around the island and they are paved very well. The island is filled with lots of coconut trees and other vegetation. Just a few minutes of walk to the backside of the island, we will be greeted with a fine beach which instantly attracts us with it’s splendid and vibrant colors of waters. Looking at the sea, the first thought that hit my mind was that “Had it not been the Ross Island, probably there wouldn’t have been Port Blair after the Tsunami in Dec, 2004”.

It is this very island that had shielded Port Blair from the mighty Tsunami waves. What surprised me more is that even after the hit, the remnants remained 🙂 . The island remains closed on Wednesdays and there is a light and sound show here too, but we did look at it. Probably the next time 🙂

3 thoughts on “Ross Island – Paris of the East”