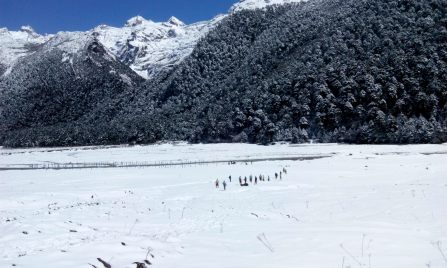 Dr. Joseph Hooker in his “Himalayan Journal” of 1855 mentioned that Lachung and Yumthang are the two most picturesque places in the whole of Sikkim and had even compared them to the valleys of Switzerland. Everyone will agree with him after having the magnificent view of these vast grassy meadows covered with so many flowers of different colours. It was as if a carpet of flowers spread over the bare ground!

Yumthang, situated at a height of 11800 ft is located at a distance of about 150 kms from Gangtok. The scenic beauty of this valley of flowers is breathtaking. The alpine meadows covered with primulas, the natural vegetation comprising of silver fir and pines, the blooming Rhododendron forests, the snow peaks of Himalayas with the Lachung River cutting across it is truly a fascinating destination for nature-lovers.

The mountain peaks like Pauhunri and Shundu Tsenpa and some other glaciers form the backdrop of the river Teesta. Another speciality of Yumthang is the hotsprings. Yeah, even in the freezing temperatures, one can feel the warmth of this sulfur rich hot water, which is believed to have healing powers. A hot spring is located just right side of the river which is in a close proximity to our base camp. But, didn’t go there as it was snowing continuously and the water was not that warm 😦

Our next destination is Shiv Mandir; six kms away further north. The trek to this place was so refreshing and exhilarating. The serenity of the valley cannot be described in words and one should experience this at least once in a life time! We started our trek towards Shiv Mandir early in the morning when it started to drizzle. Though the road is quite treacherous, the marvelous scenic views offered by the snow-clad mountains were awesome. Except for the road, everything else which we could see is covered with snow.

There was a point when we missed the off-road track leading to Shiv Mandir and started stopping the car drivers asking for the directions. Interestingly, almost all the drivers stopped by and were very cordial in guiding us. Not only Yumthang is great, but it’s ambiance too! After trespassing few walls, passing through the barely grown shrubs and plants, sliding down the sloppy ice-sheets, we were at the Shiv Mandir finally.

The temple is dedicated to Lord Shiva. This is not a regular temple; I mean not a big one which we generally see. It was aloof, small, and dark and lit by some lamps. The linga is placed on an elevated platform and there is a small track around it to do the pradakshinas. The tranquility of the premises invokes the spiritual nature of every person who visits this temple. Om Namah Shivaayah!

Further up and about 23 kms from Yumthang at an altitude of over 15000 ft, there is a place called Zero Point or YumeSamdong. For most of the times, this place remains covered with snow. Without a visit to zero point, the visit to Yumthang would be incomplete! Anyways, my romance with one of the most beautiful places on the earth came to an end with this last trek..